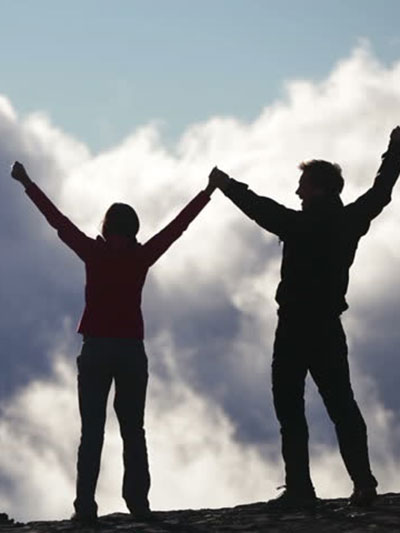 I’ve been an Olympic-level worrier from a very young age. From about 10 to 14, I had periods of intense worrying about a variety of unrelated topics, including fearing that I was losing my faith in God, that I had cheated on tests that I knew I hadn’t cheated on, that I was a generally bad person. I would worry about small things I’d done years in the past, feeling as guilty as if I had committed a felony. I tried everything I could to soothe them, such as praying in specific ways, avoiding anything that reminded me of them, and most often “confessing” to my mom. I kept each fear to myself for weeks or months, ashamed of whatever transgression I thought I had committed and embarrassed by the unreasonable amount of guilt I felt. It would build until I couldn’t handle it anymore and then I would “confess” to my mom, who tried to understand my panic. My parents were just as dumbfounded as I was about why these cycles happened. After talking to her, I would feel better for a while, then something else would pop up. Each time, the interval between the relief and the start of a new fear grew shorter and shorter, so I began to worry all the time.

At the end of 8th grade, I developed two of the most terrifying fears that I had experienced. First, that I was going to kill myself. Now, I didn’t actually want to hurt myself. I remember seeing a medication commercial that declared “Talk to your doctor if you have thoughts of wanting to hurt yourself.” That statement alone sent me into a spiral. What if I did want to hurt myself? But I don’t, I would respond. But what if you do? Does even thinking about this question mean you want to hurt yourself?

Around the same time that this fear arose, I suddenly started worrying that a family member had sexually abused me. Again, I knew this person never had and never would. What kind of person would fear this from someone who had only ever loved me? I had never experienced abuse. I was disgusted with myself and felt like I was going crazy.

My brain circled in loops for months on these two fears. For years, I had wondered if I should see a psychologist, but built it into The Worst Possible Outcome because in my mind, I had to face my true craziness if I saw someone. But at 14, I’d hit the end of my rapidly fraying rope. I decided I needed to tell someone about these fears, bearing in the mind the possibilities that a) I might be institutionalized for suicidality and b) I could destroy my family if someone didn’t believe me when I said the family member had never hurt me.

I told my mom, who was at a loss. After talking to a friend who was a psychologist, the friend said, “This sounds like classic obsessive-compulsive disorder.” And like that, my fears had a name. It was the worst day of my life, but suddenly, we had hope.

Our friend referred us to an OCD specialist in the area. The friend emphasized the importance of a trusting relationship between the therapist and client – and if it’s not the right fit, find another therapist. Otherwise, it just won’t work.

I was extremely blessed to click with the incredible OCD specialist to whom she referred us – Dr. Theresa Shank. With her non-judgmental listening and guidance, Dr. Shank taught me and my parents that my constant fears were obsessions and that I did not need to control the intrusive thoughts. OCD is like a Chinese finger trap: the more I resisted and tried to control the anxiety with my compulsions of avoidance and confessing, the tighter the anxiety took hold. But as I learned to tolerate the thoughts and view them more objectively, it became easier to recognize and sit with the obsessions.

Dr. Shank and I built a base of cognitive-behavioral therapy (CBT) skills and began using exposure and response therapy (ERT) to practice purposefully facing the anxiety without compulsing. But she never pressured me to move beyond what I could handle at the time, which were small exposures to some of my milder obsessions.

One year into treatment, Dr. Shank encouraged me to attend the International OCD Foundation’s annual conference, which was being held in DC that year. My mom and I had an amazing experience meeting individuals and families also affected by this frustrating, odd illness.  Most importantly, I realized from other people’s success stories that I needed to do the most challenging exposures for my most feared obsessions to kick OCD in the butt. I took this motivation back to Dr. Shank and she knew I was ready to tackle what I’d been avoiding. With her close supervision and the participation of the family member – to whom I will be forever grateful – we spent about two months developing and carrying out exposures. At times, it was pretty harrowing, but when I purposefully tried to make the anxiety as high as it could go and maintain it there, my body and mind started habituating faster and faster. The same scripts for exposures that initially made me want to run away gradually stopped feeling “dangerous.” They would never be pleasant, but they became boring. And when you’ve been terrified of something for years, boring is miraculous.

After about a year and half of consistently going to therapy, Dr. Shank and I decided that I was on maintenance mode. Over the years, I’ve had some flare-ups of obsessive anxiety, but with intermittent appointments with Dr. Shank and my own practice of CBT and ERT, I’ve never returned to the level I experienced as a young teenager.

It’s been 10 years since I first met Dr. Shank and learned that I had OCD. I’m a registered nurse in an emergency department now, which kind of means my whole job is an exposure. I never would have thought I could handle and even enjoy this type of chaos, but good therapy can make you into person that surprises your old self. My story came full circle last year, when I was caring for a person who came in to be seen for thoughts of self-harm and fears of hurting other people. After one conversation, I knew this person was not suicidal or a risk to others. They were obsessing, plagued by thoughts and images and then feelings of revulsion so strong they were almost audible. It wasn’t life they wanted to stop, but the endless cycles. They were me, 10 years ago. As I got their last set of vital signs before they were discharged with follow-up, they cried to me and said, “I just wish I knew if it will get better.” My professional nurse wall broke and I hugged this person and told them “I’ve been there, with thoughts just like these, and I’m telling you, it can get better.” And it has.

To make an appointment with any of our providers, please call the office line at 410-979-2326. You can also email erin@cpeclinic.com or jennifer@cpeclinic.com.